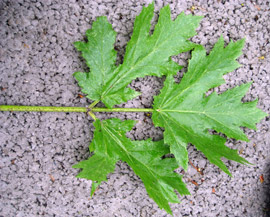 Giant hogweed (Heracleum mantegazzianum) is a TOXIC weed containing a substance within its sap that makes human skin ultra-sensitive to UV light. Large, watery, burn-like rashes appear within 15-20 hours after skin is exposed to the sap and then to sunlight. If skin is exposed to the sap or if you brush against the plant, the area should be covered immediately and washed as soon as possible.

Hogweed is also highly invasive and spreads quickly through riparian and other areas. Similar to knotweed it shades out and replaces native, understory vegetation and prevents new native trees from growing. It increases stream bank erosion as its small roots do not have nearly the density or holding capacity of the natives it replaces. Hogweed is one of the worst invasive plants in all of Europe. Giant hogweed is one of the highest weeds of concern to the Oregon Department of Agriculture but still occurs at a very low level in Multnomah County. 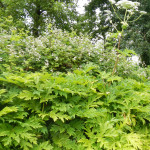 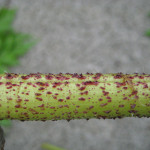 Giant hogweed closely resembles cow parsnip, a common, native plant, but is distinguishable from cow parsnip by its massive size. Hogweed can reach 10-15 feet tall with an umbrella-like flower head that is up to two and a half feet across and contains numerous white flowers. Cow parsnip rarely exceeds six feet in height with a flower head of less than one foot. Hogweeds massive, three to five foot wide, deeply incised leaves also dwarf those of cow parsnip.

The plant can stay in a rosette form, with its leaves low to the ground and with no flower head produced for up to four years. In rosette form hogweed can grow up to four feet tall with its giant leaves spread wide. In May through July of the second, third or fourth year the massive stalk and flower head are produced and elongate to their full height. The stalks of hogweed are bumpy, hollow, 2-4 inches wide and have deep red to purple blotches and erect bristles. Fruits are flat, oval tan with brown lines and about 3/8 of an inch long. Each plant can produce up to 50,000 seeds, which can remain viable for many years. Giant hogweed dies back in late summer/early fall but the dried stalk and flower stems can persist through winter. 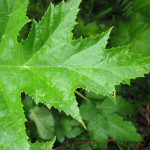 Giant hogweed leaves are also easy to tell by their size and shape, reaching 3 to 5 feet across in the pattern shown here. 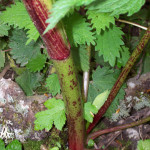 Another closeup of giant hogweed stalks. If you think you have spotted giant hogweed, please contact us right away!