EMSWCD » On Your Land » Weeds » Weeds to Know » Blackberry 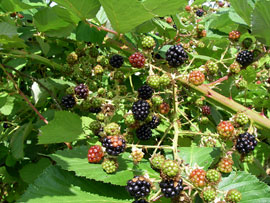 Armenian blackberry, otherwise known as blackberry, is arguably the most common and widespread invasive species in the Pacific Northwest. It is also commonly referred to as Himalayan blackberry. Its familiarity in the landscape leads many people to think that it is native to the region. However, it is thought to have arrived in Oregon in the late 1800’s. It is the most economically destructive noxious weed in western Oregon, and the Oregon Department of Agriculture has it as a B listed species. It is overwhelmingly successful in our region where it aggressively displaces native vegetation. It thrives in open and even partially shaded areas. It can dominate riparian habitats as well as other edge habitats where it out competes native vegetation.

Shorelines held by blackberries are prone to erosion as the roots do not hold soil nearly as well as native plants. Blackberries also leave most of the soil under the plants bare, increasing sheet erosion from overland water flow. They also prevent the establishment of native trees that require sun for germination and photosynthesis. Dense impenetrable thorny thickets can block the movement of wildlife, and also inhibit access for recreational activities, and if it weren’t for its delicious berries it would have few, if any redeeming qualities. 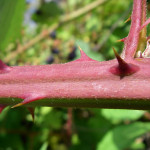 Blackberry (Rubus discolor) has thorny canes which are often green, but can turn red in sunny conditions. 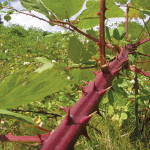 Blackberry’s dense thickets can block the movement of wildlife and inhibit human access for recreation.

Armenian blackberry is a perennial shrub with stout arching heavily ribbed canes that are armed with curved thorns. The canes can grow up to 15 feet high and 40 feet long, and can be 2-3 cm thick at the base. These canes are biennial. In its first year the new stems grow vigorously to their full length, trailing along the ground or arching up and over existing vegetation. In its second year the canes don’t grow longer, but produce side stems which will flower and produce fruit. The canes are typically green but can be reddish to red if in bright sun.

On the first year canes the leaves are palmate and compound with five leaflets. These leaflets are oval to round and roughly 3 inches long with serrate margins. They are dark green on top, but whitish colored on the bottom. The flowers are white to pink, and in clusters at the tips of the canes. The delicious and recognizable purple/black fruits arrive in summer.

Invasive blackberry can spread in two ways. The edible seeds can be dispersed by birds and animals to establish new colonies. Also, when the tips of canes touch the earth they will sprout roots, creating clones of itself. These reproductive strategies allow plants to expand across a landscape or to jump great distances and create new infestations.

Blackberry thrives in riparian areas and is prone to causing heavy erosion in the areas it covers.

Controlling blackberries may seem daunting, but the longer you wait to tackle an infestation, the harder it will be. There are many strategies to controlling blackberry vines, and each site will probably require a slightly different control program.

Manual control of blackberries can be successful with time and persistence. To control manually you must remove the roots of the plant from the earth. This is most effective when the root ball is removed from the ground. There are numerous methods for this, but a shovel will do for small or modestly small infestations. Very small segments of blackberry roots will be able to re-sprout, so you must return to the site often to control what was previously missed. By continuing your efforts you will eventually starve the plants of the sun’s energy and they will die off.

Spraying blackberries with an appropriate herbicide can be effective, but even with herbicides you must monitor your sites for resilient plants and sprouting seedlings. Often, mature stands of blackberries can grow high and large. In cases like this it is advisable to smash or cut these vines to the ground before you spray. Smashing can be done by rolling large pallets or boards over the vines, pushing them to the ground. Cutting can be done with any type of mower large enough to handle the job, or a bulldozer can be used to pull the vines from the ground. With the vines near the ground it becomes easier to spray and keep any mist on the target plants.

A combination of manual control followed by a herbicide treatment may be the most effective method of control. Start by cutting the vines to the ground in early summer. Return to the area around a month later and spray any regrowth. This should kill most of your blackberry plants.

EMSWCD » On Your Land » Weeds » Weeds to Know » Blackberry