EMSWCD » On Your Land » Weeds » Weeds to Know » Common Gorse 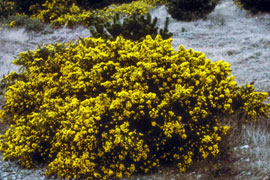 Common gorse (Ulex europaeus) is a prickly, evergreen shrub which looks very similar to scotch broom, especially when in bloom. Gorse will grow in much more dense, impenetrable thickets than scotch broom, excluding native plants and animals and rendering land useless. Gorse was introduced into Oregon prior to 1894 but is only commonly found in the southwestern part of the state. Gorse is not known to be established in Multnomah County. Gorse grows especially well in infertile and disturbed sites but also does well in pasture and forest fringes.

Gorse is slow to become established, but once it gains a hold it is incredibly difficult to eradicate due to the long lived seed bank. A mature plant can produce up to 18,000 seeds, which can remain viable in the soil for 30 years or more. This is why it is so important to catch gorse infestations as early as possible, ideally in their first year. When mature, the hairy seed pods will explosively burst open and eject the seeds several feet from the plant and the seeds can disperse in water and by animals and birds. Gorse can also resprout from cut stumps and may be spread by rhizomes as well. Gorse is an extreme fire risk due to high levels of volatile oils in its branches, another reason to keep it away from our homes and forests. It can also increase erosion on steep slopes.

Gorse can grow up to 15 feet tall and 30 feet around. It has prickly spine like leaves that range from half of an inch to 2 inches. Gorse produces a profusion of yellow, pea blossom shaped flowers very similar that form at the ends of branches from early spring to late summer. The spiny leaves are the best way to differentiate gorse from scotch broom which generally has three-parted, non-spiny leaves . Gorse branches are green when young, but turn brown with age.

EMSWCD » On Your Land » Weeds » Weeds to Know » Common Gorse