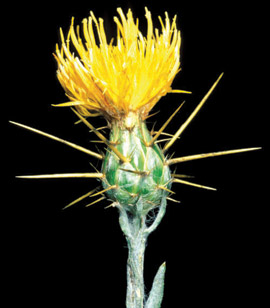 Yellow starthistle, Centaurea solstitialis, is a particularly nasty type of invasive knapweed in the Aster family. It is easily recognizable from its brilliant yellow flowers, and cactus like spines. It has taken over vast areas of land in the western United States with estimates of over 15 million acres in California, 280,000 acres in Idaho, and 135,000 acres in Oregon. It is common in range land in eastern Oregon, and even near the coast in the Siskyou Mountains of southern Oregon. It is not currently known to exist in Multnomah County, but as other knapweed species are beginning to show up in waste areas and along roads, so it is feared yellow starthistle is rapidly approaching.

Human activity is the main mode of long distance movement of yellow starthistle seeds. Seed is transported in large amounts by machinery and cars. The movement of contaminated hay and uncertified seed is also important in the long distance transportation of this and many invasive weed seeds. Once at a new site, the seed is transported by animals and humans. The short, stiff bristles are covered with microscopic hair-like barbs that can cling to clothing, hair and fur. Seed dispersal by wind appears to only move seeds a few feet.

Yellow starthistle, finds its native range in Eurasia in south central Europe along the Mediteranian Sea, the Middle East, and Asia Minor. It was accidentally introduced by way of agricultural products into Chile from Spain in the 1600’s and made its way to California’s central valley in a shipment of alfalfa seed in the mid 1800’s. The first reported case in Oregon was in Deschutes County in 1933.

Yellow starthistle is designated as noxious for many reasons. As is typical with invasive plant species, infestations displace native plants. This leads to a reduction in wildlife habitat, leading to decreased native plant and animal diversity, and ultimately to non-functioning ecosystems. Increased soil erosion through the displacement of native vegetation is another adverse result of invasive species infestations. Because of the scale of some infestations habitat fragmentation can threaten natural ecosystems further by negatively impacting plant and animal communities. As yellow starthistle pushes out native plants, it limits forage opportunities as grazing animals avoid this plant due to its bitter taste and sharp long spines. As a result, heavily infested grazed areas greatly increase the cost of managing livestock.

It is also a poisonous plant to animals who ingest it, causing a neurological disorder of the brain called ‘chewing disease’. Toxicity effects for this disease are cumulative. Yellow starthistle has also been known to cause problems in cereal crops, orchards, vineyards, and other agricultural lands. It reduces land value and limits access to recreational areas. It has also been shown to deplete soil moisture reserves in annual grasslands. It was acknowledged by the California State Water Resources Control Board that control of weeds could significantly conserve water. It was estimated that it may cause an economic loss of $16-$56 million in water conservation per year!

Yellow starthistle is an annual, sometimes biennial, from six inches to five feet tall. Plants are highly competitive and typically develop into dense stands. They are characterized by their brilliant yellow flowers in spring and early summer. The roughly half inch spines radiate from the base of the flower head. They have stiff stems that openly branch from near or above the base or sometimes not branched in very small plants. Stem leaves are alternately arranged and are narrowly oblong. The margins are smooth, toothed, or wavy. Leaf bases extend down the stems and give stems a winged appearance. Rosette leaves typically withered by flowering time. The foliage is grayish/green and covered with thick stiff hairs. Basal leaves are 2-3 inches long and deeply lobed. Leaves near the top of the plant will become shorter and narrower with pointed tips. The taproot can extend over one meter deep, allowing it to outcompete many natives for moisture and nutrients.

Please report any sightings of this weed. We are able to offer free control of this species.