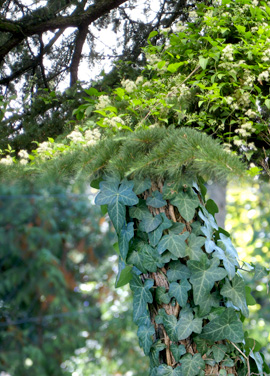 In our region there are two invasive vines that are common and expanding their range every year: Clematis vitalba (Clematis or “Old Man’s Beard”), and Hedera helix, (English Ivy). The capacity these species have to degrade the natural environment is spectacular. Ivy and clematis have been spreading in the Columbia Gorge National Scenic Area and along the Sandy River for quite some time, but when the State of Oregon decided to ban the sale of ivy in 2010, EMSWCD decided to begin a control project for these species. Now that people are no longer legally re-planting ivy, control efforts have become much more effective.

We understand that eradication of Clematis and English Ivy is nearly impossible, but our goal is to eliminate these species from areas where they can easily spread into the more wild parts of the Columbia Gorge and forests of Mt. Hood. In 2011, the first control work by EMSWCD began in the east end of Multnomah County and continued west through the Columbia River Gorge. Each site’s treatment plan is developed according to a myriad of factors, including the location and the size of the infestation. This includes killing vines by mechanical, herbicide, and/or manual control. With any approach it is practically impossible to attain 100% control with only one treatment. Our control teams revisit previously treated sites to ensure that these weeds do not re-infest areas we have already controlled. When the vines on heavily infested areas are controlled, EMSWCD staff determines if native replanting is beneficial and necessary for the re-vegetation of these areas.

The control project area consists of all infested areas east of the Sandy River in Multnomah County. All landowners in this area are eligible for free control of these species. Please contact Chris Aldassy for questions about this program and enrollment.