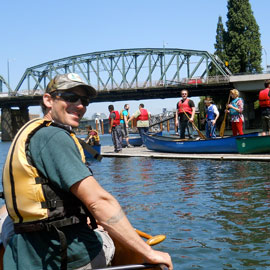 Ross Island is a unique urban treasure. Standing in the middle of the Willamette River a mile from downtown Portland, the island with a heavy industrial past also happens to be a significant habitat for fish, birds, beavers and otters. Named an Important Bird Area by the Audubon Society due to its use for both resident and migratory birds, 46 species have been officially counted on the island, including bald eagles. Even though most of this natural area transitioned to City of Portland ownership in 2007, the island is still off limits to the public as clean-up and restoration efforts continue. Unless you are there to work.