Sixteen acres of property along Johnson Creek in east Multnomah County are now forever protected thanks to a conservation easement agreement between the East Multnomah Soil and Water Conservation District (EMSWCD) and property owner Lou Foltz.

“Our partnerships with private landowners are critical to protecting our natural and farmland resources” said Carrie Sanneman, board chair for the East Multnomah Soil and Water Conservation District. “It is heartening to know that EMSCWD’s decades long partnership with the landowner has now been secured for perpetuity thanks to his generosity and foresight,” Sanneman noted.

The property is adjacent to two working farms owned and operated by the conservation district – Headwaters Farm and Mainstem Farm. Preventing development on this property helps protect the rural character of the area, allows for farming to continue into the future and conserves important habitat for native fish, wildlife and plants. 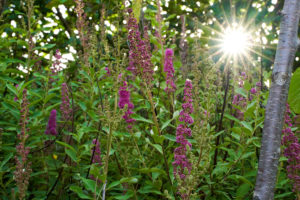 A view of the maturing plantings on the property

“I’m pleased that we are restoring a variety of flora on the property while also maintaining the ability to designate a portion of it for farming,” said landowner Louis Foltz. “I’ve been partnering with the conservation district for many years to ensure that this acreage is a healthy environment for fish and wildlife, while contributing to a clean water environment in Johnson Creek. This relationship will allow future landowners to sustain the habitat while simultaneously providing an option for some farming.”

EMSWCD has partnered with the landowner for many years to improve water quality and wildlife habitat on his lands adjoining Johnson Creek. Native stream-side vegetation has been planted and nurtured, resulting in a maturing riparian forest that increases biodiversity. These habitat improvements also have the benefit of lowering temperatures in Johnson Creek, which is critical to salmonid survival.

The property was historically operated as a cattle farm. Sustainable livestock operations are expected to return to a portion of the property soon thanks to a farm lease between the landowner and a participant in EMSWCD’s Headwaters Incubator Program for beginning farmers (which operates next door to the property).

The East Multnomah Soil and Water Conservation District managed this transaction through the working farmland protection component of its Land Legacy Program, which works to secure the sustainability of the local agricultural economy by ensuring that high-quality farmland remains available for use by current and future farmers. For farmers who wish to sell their property outright, the conservation district can purchase those properties in order to avoid their conversion to other uses. And for farmers who would like to stay on the farm but still realize some of the value of their property, the conservation district can purchase a working farmland easement.

"I just came to this class to accompany my wife. She's the gardener in the family. I had no idea that gardening could play such an important role in watershed restoration!" -husband attending a
rain garden class with his wife
prevnext