Paper birch (Betula papyrifera) is a medium to fast growing deciduous tree, reaching a mature height of 50-70 feet. The leaves are simple, alternate, to 4 inches long, toothed and roughly egg-shaped, coming to a pointed tip. The leaves turn bright yellow in the autumn. Flowers are male and female catkins to 1½ inches, blooming in the spring.

Paper birch is a widespread North American species; on the West Coast, the birch is considered native from eastern Oregon to Alaska. Paper birch is known for its distinctive bark, which is whiter than many birches and peels in papery strips. The bark of the birch was used for canoe-making across the United States outside of the Pacific Northwest (in the Pacific Northwest, Western redcedar is more commonly used). Traditional uses for birch resin include medicine, adhesive, and chewing gum. Today birch is a commonly used for pulp wood and as an ornamental tree.

Because all birches attract aphids and their “honeydew,” the tree is not recommended for patios or parking areas. 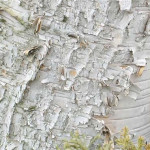 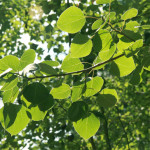