As a farmer, it’s extremely satisfying to see a healthy, robust stand of cover crop germinating. Cover crops can provide a myriad of benefits, including soil retention, transferring atmospheric nitrogen into the soil, suppressing weeds, adding organic matter, reducing compaction, and improving soil depth—saving a farmer time and money in the long run. There are many types of cover crops, and proper selection depends on soil necessities, season, budget, equipment available, weed pressure, climate, and other factors. Given the dynamic problem-solving nature of cover crops, it should come as no surprise that they are a key piece of our conservation agriculture program at Headwaters Farm.

This summer Sudan grass was grown on approximately 20 acres, in order to add an instant injection of organic matter to the soil. As a thick, vigorous grower, Sudan grass is also great at out-competing most weeds. While most of the Sudan grass was worked into the soil to give way to other cool-season cover crops, on one field it was left to grow through the fall, and eventually be “winter-killed” once the first frost hits. In early September, this field was mowed to about four inches and then under-sown with crimson clover, an annual, nitrogen-fixing, soil-stabilizing legume. The Sudan grass—which is now back to three-feet tall—will fall over once it dies, helping to protect the soil and allowing the crimson clover to establish. 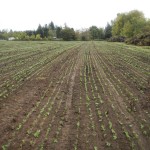 Cover crops begin to come in at Headwaters Farm 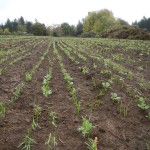 The majority of the open space at Headwaters Farm has received a winter cover of common vetch, bell beans, mangus pea, and oats. This simple, inexpensive blend will provide all the same benefits listed above. One additional advantage is that this mix comes pre-inoculated with the appropriate macrobiotic communities to ensure nitrogen fixation.

One last, somewhat experimental, cover crop being used at Headwaters Farm involves two acres in daikon radish and crimson clover. One of the issues being worked though at the farm is a naturally-occurring hardpan. Since daikon radish has the ability to drop an 18-inch long taproot, it has been used to successfully break hardpan in other parts of the country. Like the Sudan grass, daikon will winter-kill, which is where the crimson clover again is used to retail soil, minimize rain-induced compaction, and fix nitrogen.

It’s incredible to see the changes from just one summer of cover cropping, and there is great anticipation for the benefits from the various winter covers. The hope is that these initial investments in the soil will decrease the need for fertilizer, reduce weed pressure, and ultimately help incubator farmers get their businesses off the ground.