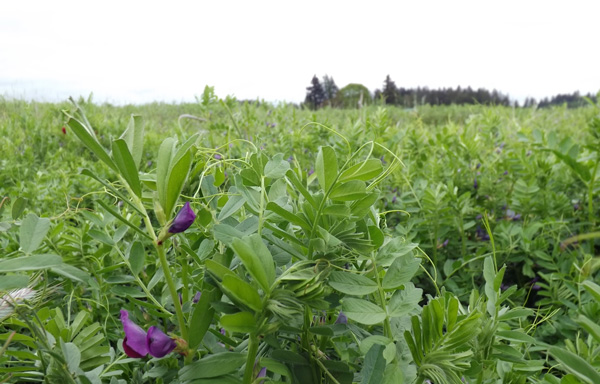 There are four crucial pieces to the soil health puzzle:

If one or more of these pieces are not practical in your cropping system, the other pieces become even more important. Organic matter will sustain healthy populations of soil microbes.  These microbes break down the organic matter, which stabilizes nutrients and the structure of the soil.

Cover crops are a great tool to add organic matter and they keep the soil covered, protecting it from erosion.  Cereal crops scavenge unused nitrate from the soil, reducing groundwater contamination. They also suppress weeds by shading them out.  The roots of legume cover crops, like clover and vetch, have a mutually beneficial relationship with a bacterium that can fix nitrogen from the soil.  A portion of this nitrogen will be available for the following crop after the cover crop is incorporated into the soil and breaks down.  See the nutrient management section for information on how to estimate how much nitrogen is provided, allowing you to reduce the amount of fertilizer you apply.

Timing is everything. You will want to base your selection on when you are able to plant the cover crop as well as when the cover crop will need to be incorporated into the soil and the planting date of your crop.  It is best to wait at least three weeks between incorporation of the cover crop and planting of the cash crop.  For the biggest impact to soil health and to prevent them from becoming a weed, cover crops should be incorporated before they go to seed.  The table below summarizes the traits of the most commonly used cover crops in this area.

Many producers prefer to mix a grain with a legume to get the benefits of both. While there are not specific seeding rates for mixtures, a rule of thumb is to seed the grain at one third to one half and the legume at two thirds of the normal rate.