The Coast Douglas-fir (Pseudotsuga menziesii subsp. menziesii), a subspecies of Douglas-fir, is an evergreen conifer. It is native to the coastal regions from west-central British Columbia southward to California. In Oregon and Washington its range is continuous from the Cascades crest west to the Pacific Ocean.

The bark on young trees is thin, smooth, gray, and contains numerous resin blisters. On mature trees, it is 10-30 cm thick (4-12 inches) and corky. The needle-like leaves are spirally arranged and 2-3.5 cm long. Coast Douglas fir foliage has a noticeable sweet fruity-resinous scent, particularly if crushed.

Douglas fir seeds are an extremely important food for small mammals. Mice, voles, shrews, and chipmunks consumed an estimated 65 percent of a Douglas-fir seed crop following dispersal in western Oregon. The seeds are also important in the diets of the pine siskin, song sparrow, golden-crowned sparrow, white-crowned sparrow, red crossbill, dark-eyed junco, and purple finch. Coast Douglas fir seedlings are not a preferred browse of black-tailed deer and elk, but can be an important food source for these animals during the winter when other preferred forages are lacking.

Mature or ‘old-growth’ Coast Douglas-fir is the primary habitat of the red tree vole and the spotted owl. Red tree voles may also be found in immature forests if Douglas fir is a significant component. This animal nests almost exclusively in the foliage of Douglas-fir trees. Nests are located 2-50 m (6-160 feet) above the ground. The red vole’s diet consists chiefly of Coast Douglas fir needles.

In many areas Coast Douglas fir needles are a staple in the spring diet of blue grouse. In the winter, porcupines primarily eat the inner bark of young conifers, especially Douglas-fir. Douglas-fir snags are abundant in forests older than 100-150 years and provide cavity-nesting habitat for numerous forest birds.

The leaves are also used by the adelgid Adelges cooleyi; this 0.5 mm long sap-sucking insect is conspicuous on the undersides of the leaves by the small white ‘fluff spots’ of protective wax that it produces. It is often present in large numbers, and can cause the foliage to turn yellowish from the damage in causes. Exceptionally, trees may be partially defoliated by it, but the damage is rarely this severe.

The shade-intolerance of Douglas fir plays a large role in the forest succession of lowland old growth communities of the Pacific Northwest. While mature stands of lowland old-growth forests contain many Western Hemlock (Tsuga heterophylla) seedlings, and some Western Red cedar (Thuja plicata) seedlings, Douglas fir dominated stands contain almost no Douglas fir seedlings. This seeming contradiction occurs because Douglas-firs are intolerant of shade and rarely survive for long within the shaded understory.

Douglas-firs are pioneer trees, and possess thicker bark and a somewhat faster growth rate than other climax trees of the area, such as the Western Hemlock and Western Redcedar. This quality often gives Douglas-firs a competitive advantage when the forest experiences a major disturbance such as fire. Periodically, portions of a Pacific Northwest lowland forest may be burned by wildfire, may be logged, or may be blown down by a wind-storm. These types of disturbances often create conditions where Douglas-firs have an advantage over less drought and fire-tolerant species.

Conifers dominate the climax forests of the Coastal Douglas-fir. All of the climax conifers that grow alongside Douglas-fir can live for centuries, with a few species capable of living for over a millennium. Forests that exist on this time scale experiences the type of sporadic disturbances that allow mature stands of Douglas firs to establish themselves as a persistent element within a mature old-growth forest. When old growth forests survive in a natural state, they often look like a patchwork quilt of different forest communities. Western Hemlock typically dominate old growth forests, but contain sections of Douglas firs, red cedar, alder, and even redwood forests on their southern extent, near the Oregon and California border.

The logging practices of the last 200 years created artificial disturbances that caused Douglas-firs to thrive. The Douglas fir’s useful wood and its quick growth make it the crop of choice for many timber companies, which typically replant a clear-cut area with Douglas fir saplings. The low-moisture conditions that exist within a clear-cut also naturally favor the regeneration of Douglas-fir. Because of clear-cut logging, almost all the Pacific Northwest forests not strictly set aside for protection are today dominated by Douglas fir, while the normally dominant climax species, such as Western Hemlock and Western red cedar are relatively rare.

Coast Douglas fir is one of the worlds best timber producers and yields more timber than any other tree in North America. The wood is used for dimensional lumber, timbers, pilings, and plywood. Creosote treated pilings and decking are used in marine structures. The wood is also made into railroad ties, mine timbers, house logs, posts and poles, flooring, veneer, pulp, and furniture. Coast Douglas-fir is used extensively in landscaping. It is planted as a specimen tree or in mass screenings. It is also a popular Christmas tree. 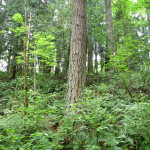 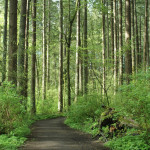 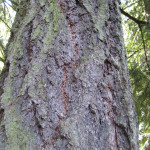 "I'm learning that what I see as a obstacle or problem area in my yard, others have created something unique with the same area."-on Yard Tour
prevnext