Athyrium filix-femina (Lady Fern or Common Lady-fern) is a large, feathery species of fern native throughout most of the temperate Northern Hemisphere, where it is often abundant (one of the more common ferns) in damp, shady woodland environments and is often grown for decoration in shady home gardens.

After flowering, rounded, egg-shaped, red edible berries appear in the late summer and early autumn. These appear to be smooth coated but are in fact covered in very short hairs, visible only at close range.

A very common species in moist, shaded places in woods. Most western Violets have yellow rather than purple corollas, but all have the perky little flower with a spur or pouch behind the lower petal. The lower petal forms a landing platform for insects seeking nectar within the spur. 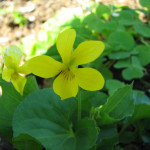 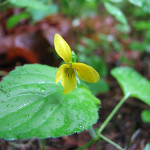 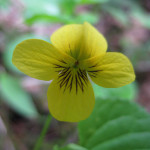 Western redcedar is a species of Thuja, an evergreen coniferous tree native to the northwestern United States and southwestern Canada.

The foliage forms flat sprays with scale-like leaves in opposite pairs, with successive pairs at 90 degrees to each other. The small cones dangle off the ends of the branches.

Western redcedar is among the most widespread trees in the Pacific Northwest, often found growing with Douglas-fir and Western hemlock in lush forests, as well as in forested swamps and along streambanks. The tree is shade-tolerant, and able to reproduce under dense shade.

In the American horticultural trade, it is sometimes called Giant Arborvitae. The name Western redcedar is also sometimes split into three words as ‘Western Red Cedar’ (though this can be confusing, as it is not a true cedar).

Western redcedar is one of the most culturally significant trees for Native American people of the Pacific Northwest. Its wood, bark, and branches have dozens of practical uses, ranging from tools and housing to cloth and ceremonial implements. Nearly every part of traditional indigenous culture uses redcedar in some fashion, and some northwest coast tribes even refer to themselves as “people of the redcedar,” so central it is to their identity and way of life. 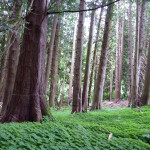 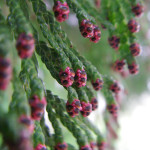 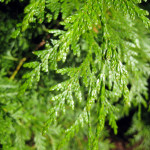 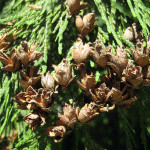 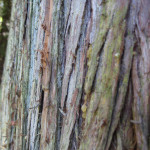 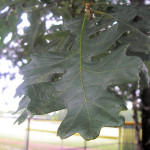 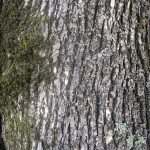 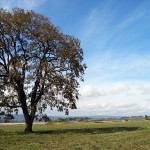 The berries are a valuable food resource for many birds. Elders are used as food plants by the larvae of some Lepidoptera (moth) species. Dead elder wood is the preferred habitat of the mushroom Auricularia auricula-judae, also known as Judas’ ear fungus or wood ear fungus.

The flowers may be used to make an herbal tea, which is believed as a remedy for colds and fever. In Europe, the flowers are made into a syrup or cordial that is diluted with water before drinking. The popularity of this traditional drink has recently encouraged some commercial soft drink producers to introduce elderflower-flavored drinks. The flowers can also be used to make a mildly alcoholic, sparkling elderflower ‘champagne’.

The plant produces an erect, unbranched stem up to about 40 centimeters tall. A non-flowering shoot bears one smooth, waxy, shiny leaf up to 10 centimeters long and 5 to 8 broad, hence its scientific name (dilatatum means ‘broad’). On plants that are flowering, 2 or 3 leaves are produced oppositely on the stems. The leaf is oval in shape with a heart-shaped base. This attractive groundcover can spread vigorously when in planted in favorable conditions.

The inflorescence is an erect raceme with star-shaped white flowers. They each have four petals and four stamens. After fertilization the fruit produced is a berry 6 millimeters in diameter. The berry is speckled red when immature and solid red when ripe. Each has 1 to 4 seeds. 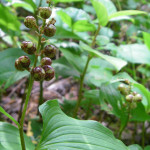 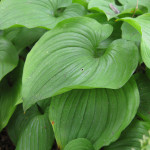 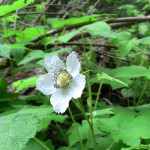 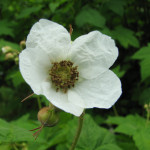