Acer macrophyllum (Bigleaf or Oregon Maple) is a large deciduous tree. It grows to 35 m tall, but more commonly 15 m to 20 m tall. It is native to western North America, mostly near the Pacific coast, from southernmost Alaska south to southern California. Some stands are also found inland in the foothills of the Sierra Nevada mountains of central California, and a tiny population occurs in central Idaho.

It has the largest leaves of any maple, typically 15-30 cm across, with five deeply-incised palmate lobes, with the largest running to 61 cm. The flowers are produced in spring in pendulous racemes 10-15 cm long, greenish-yellow with inconspicuous petals. The fruit is a paired winged samara, each seed 1-1.5 cm diameter with a 4-5 cm wing.

In the more humid parts of its range, as in the Olympic National Park, its bark is covered with epiphytic moss and fern species.

Maple syrup has been made from the sap of bigleaf maple trees. While the sugar concentration is about the same as in sugar maple (Acer saccharum), the flavor is somewhat different. Interest in commercially producing syrup from bigleaf maple sap has been limited.

The lumber from this tree has diverse uses, such as furniture, piano frames and salad bowls. Highly figured wood is not uncommon and is used for veneer and guitar bodies. 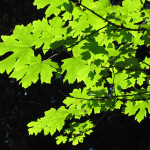 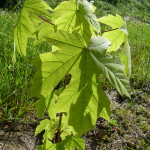 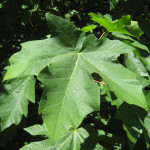 Salal is a low-growing, leathery-leaved evergreen shrub that tolerates a wide variety of conditions. Its dark blue “berries” (actually swollen sepals) are edible raw and can be made into jams, preserves, and pies. Salal berries are mildly sweet, and are often used in combination with the more tart Oregon grape.

Salal leaves are also harvested and sold to florists worldwide for use in floral arrangements. 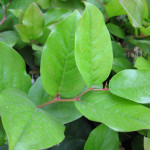 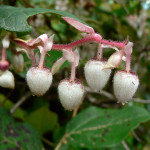 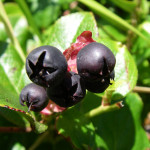 Incense cedar is a conifer native from central-western Oregon through most of California and the extreme west of Nevada, and also a short distance into northern Baja California. It grows at altitudes of 50-2900 m.

It is a large tree, typically reaching heights of 40-60 m and a trunk diameter of up to 3 m (maxima, 69 m tall and 4.5 m diameter), and with a broad conic crown of spreading branches. The bark is orange-brown weathering grayish, smooth at first, becoming fissured and exfoliating in long strips on the lower trunk on old trees. The bright-green foliage is produced in flattened sprays with scale-like leaves 2-15 mm long.

The seed cones are 20-35 mm long, and look like the open beak of a duck. They turn orange to yellow-brown when mature about 8 months after pollination.

This tree is the preferred host of a wood wasp, Syntexis libocedrii, a living fossil species which lays its eggs in the smoldering wood immediately after a forest fire.

The wood is the primary material for wooden pencils, because it is soft and tends to sharpen easily without forming splinters.

It is also a popular ornamental tree, valued for its drought tolerance. It is grown particularly in cool summer climates for its very narrow columnar crown. This narrow crown is not restricted to selected cultivars but is an unexplained consequence of the climatic conditions in these areas, and is not shown by trees in the wild.

Evergreen Huckleberry is a small to medium sized evergreen shrub native to the Pacific Northwest regions of the United States and British Columbia. In the Willamette Valley, it prefers full to partial shade, but will tolerate full sun in coastal areas. It grows slowly and prefers acidic soils.

The shiny, alternately arranged leaves are 2-3.0cm long and 1-1.5cm wide with finely serrated edges. In mid-summer, the plant produces round, edible black berries about 0.5 – 1.0cm in diameter. The berries are a valuable traditional food for many Native American cultures in the Pacific Northwest. 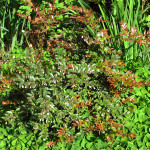 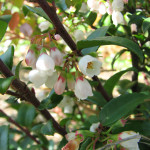 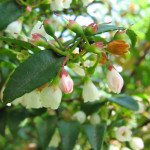 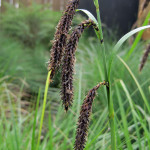 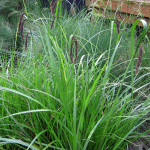